I have been wanting to post about this project for a while, but I had been too busy actually finishing her for the Artist Doll and Teddy Bear Convention in Philadelphia to have any time to write! I made her for a special challenge gallery which was part of the show; bear artists were challenged to create a doll, and doll artists were challenged to create a bear. She is not my first doll, though. I have been sculpting whenever time allows since 2003. Unfortunately, "whenever time allows" = "almost never", and I rarely finish anything I begin because when you wait more than a year for time to finish something, it can lose it's enchantment. I am so glad this little girl, who I started in September (click here and here to see  posts about the sculpting of her head), did not share the fate of the other disembodied heads in my studio!

I loved every minute of making her and I loved how she turned out. The most enjoyable thing about making her was that I had no idea what I was doing!!! Well, that is not entirely accurate, I suppose. I have gained some skills over the years that fit nicely with what I was trying to do. I have been blessed enough to take sculpting classes from several world reknown doll artists. I can sew, and I have been honing my pattern designing skills since I was about ten... 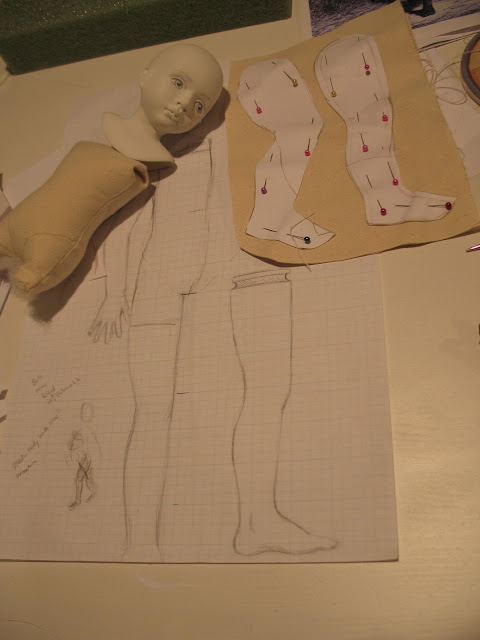 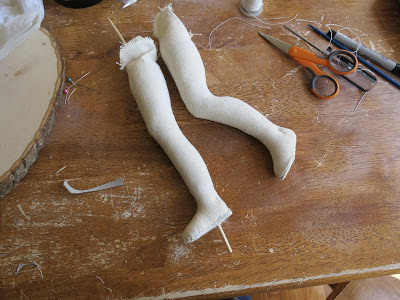 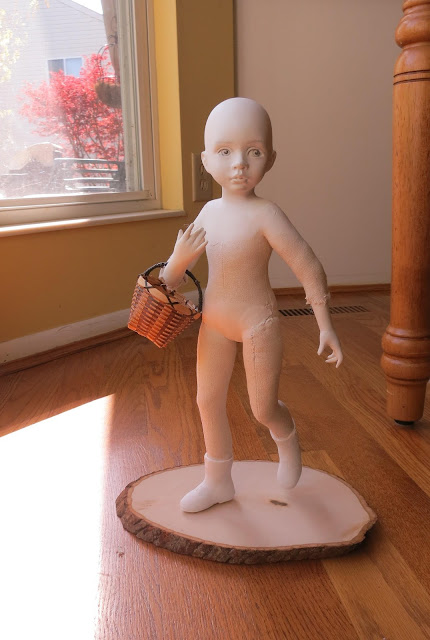 The portrait painting classes I took last year really helped me with the painting... 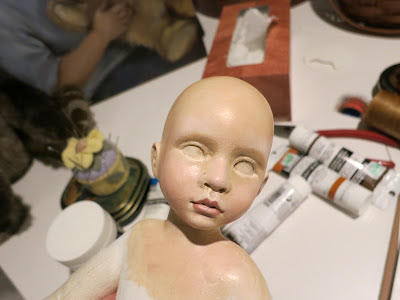 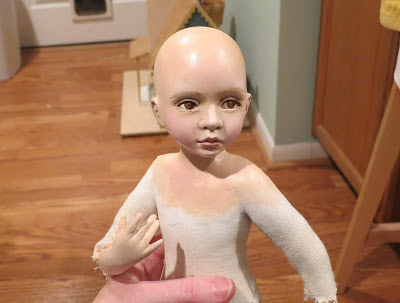 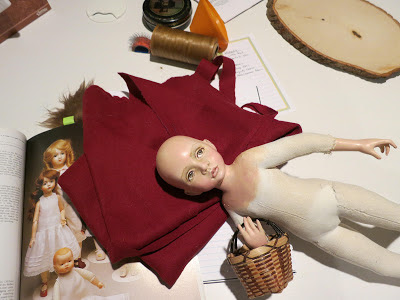 I also took a class on wig-making, and learning to tame my own frizzy hair was useful as well!~ 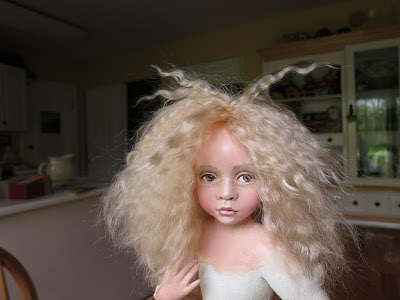 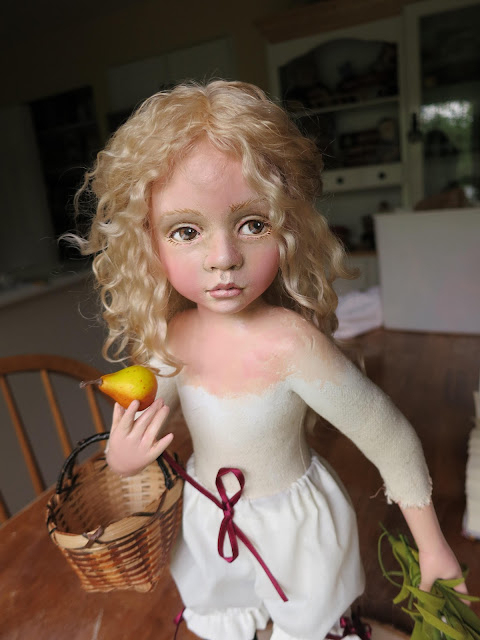 I guess I don't mean that I had no idea what I was doing, but it felt so different from making the bears because I don't yet have a "way of doing things" with the dolls. I have chosen to concentrate my artistic efforts for the last 20 years on designing and making Teddy Bears, and by now I have certain things that I always do, and I am pretty confident each bear will come out pretty close to the picture I have in my head. Who knew how the doll might turn out--and that is what was so exciting!

It brought to mind how I worked when I made things as a child. I recall one of my first doll making adventures. I had seen a picture of a cloth baby doll in a magazine and wanted to make one. My mom supplied my brother (often my partner in creative adventures) and I with an old sheet, needles and thread and stuffing --and when she saw what we'd come up with, she even bought us some yarn for the hair! We drew our pieces right on the sheet with markers and cut them out and sewed them. We didn't worry about mistakes, because we weren't afraid to try again if it didn't work.

That was just the way it was with this doll. The first pair of legs were too thin, so I made some more. I thought the bamboo skewer I put in the leg as an armature might be too flimsy, so I looked around for something and found a large knitting needle. I hate using elastic, but found that thin ribbin works and adds a sweet detail to the sleeves and drawers! She was going to be a brunette, but I loved the pale blond with the burgundy fabric for the cape. I began with a picture in my head to guide me, but I also followed where the doll lead me. I'm glad I did! I wanted her to look like a storybook illustration in 3-D and I think I have achieved that.

I was pleased and flattered that she was "adopted" very quickly at the show gallery, but I must admit I would not have been sad in the least to have had to bring her home to my studio to stay. Sometimes people ask me how I can let the bears go when I make them. I can because I know I will always make more. She was harder to let go, but I suppose I'll just have to make more dolls! 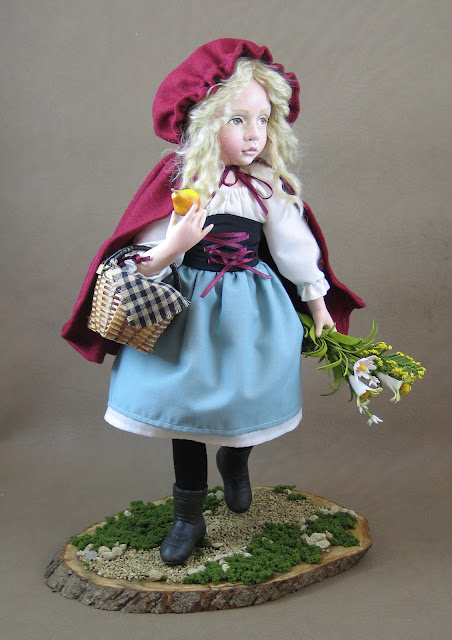 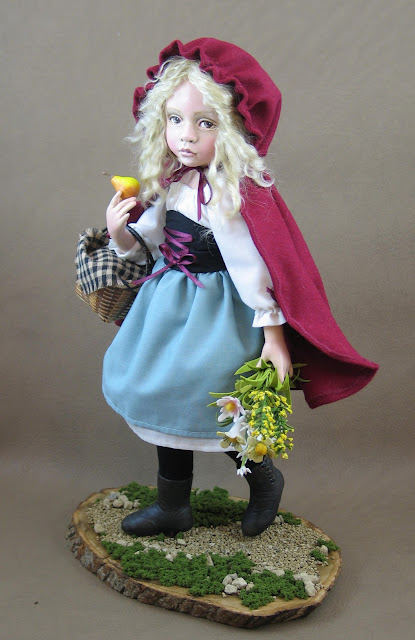 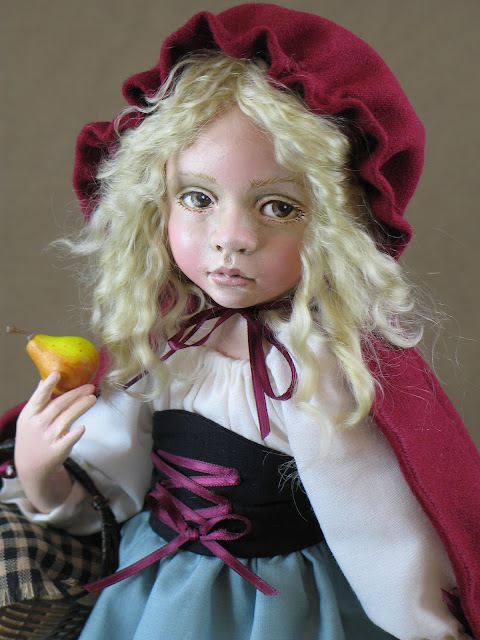 Posted by Tami Eveslage at 8:10 PM

You must make more dolls, there's no doubt in my mind ... you have such an amazing talent! This doll is fabulous and I am excited to see where she leads you ...

Oh wow, she's absolutely fabulous, no wonder she was snapped up!

I was so impressed by this girl. You should certainly explore your talents in the craft also. Look at Lulu Tatum, her dolls and her bears are both spectacular. Why not do both?

Thank you all! I have another head which I started at the same time as this one I plan to finish this summer.