Well friends,  it has been a while, I'm sorry, but it has been an unusual year. However, I have been working in my studio a bit here and there, and a even a bit more recently.

This is the 7th Annual Christmas Treasures show at www.teddiesworldwide.com . It promises to be a wonderful show with artist from all over the world creating cheerful holiday themed bears and animals. My preview bear is Noel, a 23" alpaca polar bear wearing a lovely green velveteen Father Christmas outfit trimmed in beautiful Tissavel faux fur. I invite you to visit the site today to vote for your favorite bears, and be sure to come back in a couple of weeks for the show! 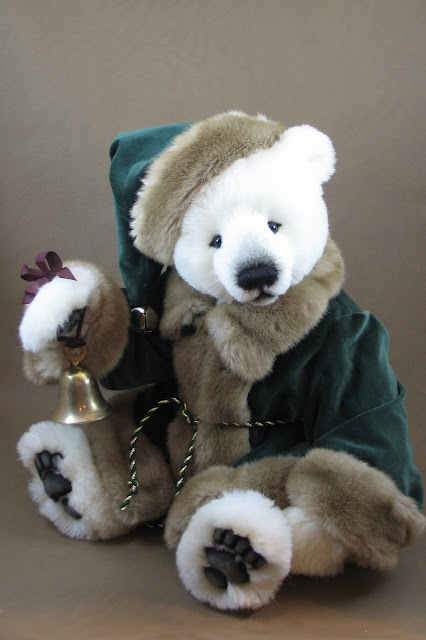 Also, even though my business name--Tami Eveslage Original Teddy Bears and Dolls--has proclaimed for several years my status as a  bear and doll artist, my doll making endeavors have been few and far between. After posting my most recent creation on Facebook, I was invited by the vice president of the Professional Dollmakers Art Guild to join this talented group! I was honored to accept! If you visit their website  www.artdollguild.com you will see why. You will also see that as their first doll and Teddy bear artist, I am featured on their homepage!

Here is my latest doll creation. She is a very personal doll for me. This little one had been emerging slowly from my mind and hands over the last few months. I had heard of "healing dolls" before (artist friend Cody Goodin introduced me to the idea years ago, and I read about them on Artist Barb Kobe's website) and decided that is what she would be for me. And she has been healing. Working on her has helped me work through the mid-life/identity crisis that has come along with the limitations pain has lately placed upon me. Some people have asked about her story--there it is. 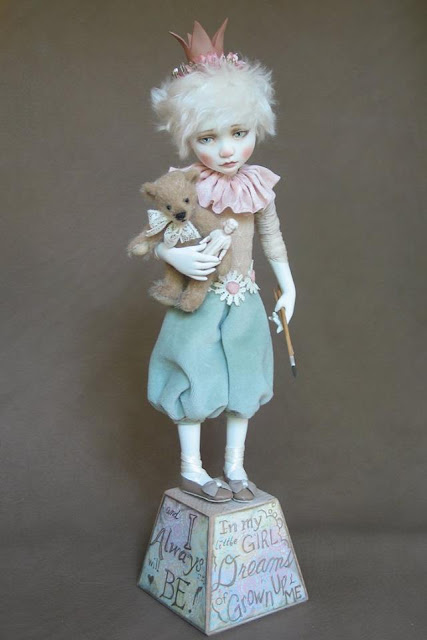 I had other plans for this head when I first sculpted it, but when I painted her, her sad little face spoke to me, I knew she needed a Teddy Bear! Shortly after I had made her bear (but not her body yet--LOL) I found this tiny plastic "frozen Charlotte" doll at the craft store. Once she was going to have a BEAR and a DOLL, I knew she was going to be a self-portrait of sorts. I made the tiny paint brushes to give her more of my favorite things!


I have wondered before at how lucky I am to have known so young what I wanted to be... 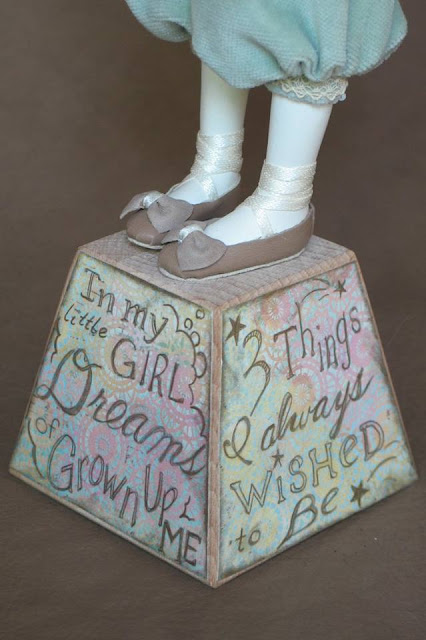 When I realized these things were practically written into my name, I could not believe I hadn't noticed before! 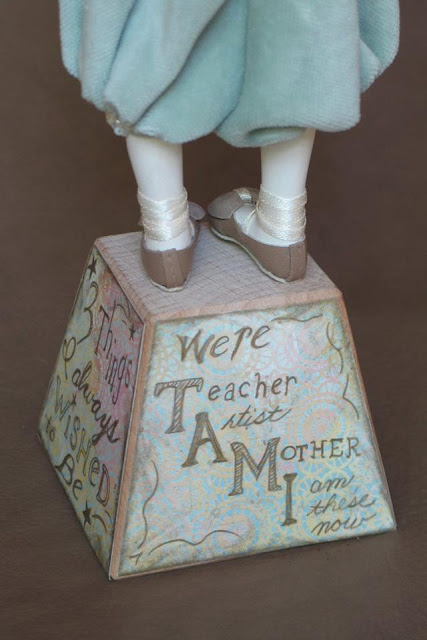 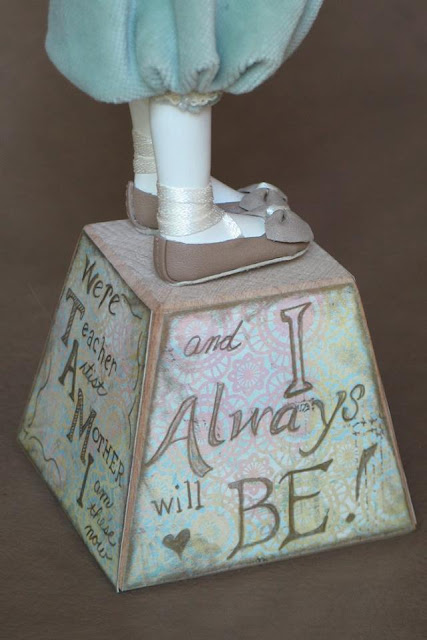 I must always remember....

The little girl was always going to have a hat. It is a crown because of this quote; "On the darkest days when I feel inadequate, and unworthy, I remember whose daughter I am and I straighten my Crown!" 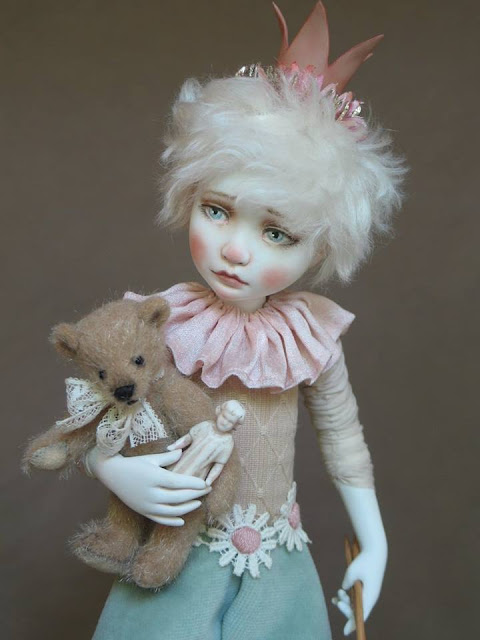 If anyone is still following my blog they might have noticed a serious  lack of bear making here. There is a serious lack of anything at all in fact, because this is my first post for 2016! The reason for that is I am still battling ongoing health issues which seriously limit my working time. They started last year around this time--just when I had decided to leave my teaching job in hopes to be able to work MORE on my bears and dolls!

I have made a few pieces for Silly Bears this year (which were promised last year), but as the pain continues I am becoming increasingly concerned that trying to "power through" the pain may cause irreversable damage. I cancelled my place in the Teddies Worldwide online show in March, and I have decided I must cancel my trip to the Quinlan Artist Doll and Teddy Bear Weekend. This makes me incredibly sad. I am not saying that I'm not going to make any bears for now..I will when I can, but I don't think I can commit to any shows until I have some idea of what's going on and a treatment plan.

Here is a little more detail about my "health issues" if you want to read it. Skip the next paragraph if you find it to be too much information. I hate feeling like a complainer--I know there are folks who have a lot more challenging things to deal with, but this has been quite depressing for me, particularly since I don't know if or when it will get better.

Basically, I have been experiencing a variety of pain symptoms in my pelvis, lower back, tailbone, and legs, which get worse with sitting, standing, and heavy activity. Currently, sitting is the worst. I can stand and work for a little  while on some days, but on others standing long enough to shower and dry my hair is about all I can do before I must lie down for a bit. Sitting is immediately uncomfortable, and it’s painful after about 15 minutes.  I've had ultrasounds, blood work, Doppler scans of my veins and arteries in my legs (checking for blood clots) CT scan of pelvis/abdomen with "normal" results. I came very close to canceling my trip to the UK last November. It was mostly a lovely trip, but the all day traveling days (there were four) were difficult, and I would really like to go again when I am well. Initially, I had noticed that the pain was worse with my periods, and as my cycle began to change those became much heavier and much, much longer (one was 10 weeks--landing me in the ER for a blood transfusion!) This, along with the pelvic pain, led my gynecologist to suggest a hysterectomy (I had a prolapsed uterus, which she suspected was the cause of my symptoms.) I had this in December and the recovery was longer than I thought--nearly two months, and while I guess I am recovered from the surgery now...I am still symptomatic. The general heaviness and lower back pain have decreased only very slightly, and of course no more bleeding, but most of the pain remains, new symptoms have occurred, and the sitting pain is worse than before.  I've been doing my own research online and I have run across a few things which fit with my symptoms, I just need to find the right doctors who will solve the puzzle, and help to set me on the right road to healing. Currently, I am trying an anti-inflammatory diet, walking as much as I can (with standing and sitting limited this is about all I can do) I'm in pelvic floor physical therapy (who knew there was such a thing?!), and I'm trying to find someone who will diagnose and treat--or at least definitively cross  off the list of suspects--- Pelvic Congestion Syndrome (PCS), Pudendal Neuralsia (PN), Pelvic Floor Dysfunction (PFD), or whatever is causing my CPP (chronic pelvic pain) . I am trying to stay positive and proactive about things. Some days I do better than others with this.

Today was not one of my better days, but I want to end this post on a positive note so I'm reposting a video I posted on Facebook a little while back.Rachel Platten's "Fight Song" has obviously resonated with a lot of people, given its constant radio play. I am one of them. When I actually listened to the words, I mentally adopted it as my theme song for this year. Last year was an amazing year for me in so many ways, particularly with my bear business. But even as I chose to leave my teaching job and focus fully on my bears and dolls, even as I enjoyed being recognized as "Teddy Bear Artist of the Year" and traveled to England and Scotland for the first time to share my work, I was struggling quietly with daily pain. I still am. My health issues do not appear to be life threatening, but they are depressing and decidedly "quality of life" threatening. While my end of the year surgery helped with some issues, the pain continues--for now. However, I am hopeful and determined that 2016 will be my Year of Good Health!

Fight Song is a good theme for the year, but Amazing Grace is one for life! The combination is beautiful, and the wonderful images of Scotland remind me of one of the highest points of my year last year!

Note: This piece is instrumental. If you don't know the words to either song you can look them up on Google