About two or three years ago, I bought this cream colored pitcher from a friend who sells Longaberger products. I had no plans for it really, since we don't use pitchers; I just really liked it. When I got home, I just put it in the center of the kitchen table, not knowing what else to do with it. That weekend, my sweet husband came home from the grocery store (yes, I know I'm lucky he does the grocery shoppping) with a big bouquet of flowers for me! "They are to put in your vase," he explained. 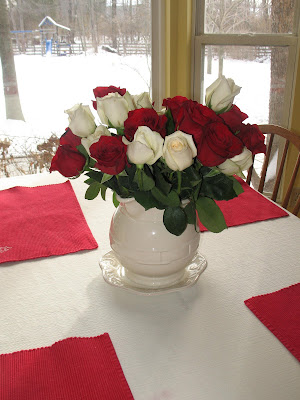 Ever since then, I get fresh flowers every one or two weeks! Sometimes, on special occasions, I get roses, like these lovely red and white ones for Christmas! 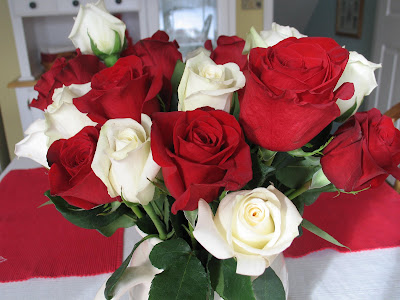 Roses may fade, but receiving flowers from your sweetheart never gets old!!! 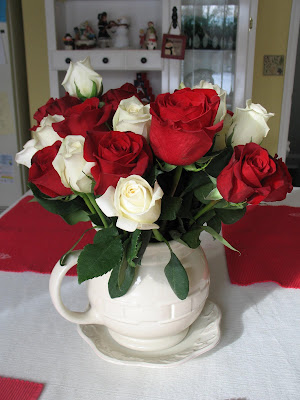 A Few of My Favorite Things

Two of my favorite Christmas activities are decorating the house and wrapping presents! I love the soft warm light in the living room when we replace lamp light with many tiny Christmas tree lights. When the whole room is decorated and lit, there is a cozy feeling which I miss terribly when it comes time to take it all down. 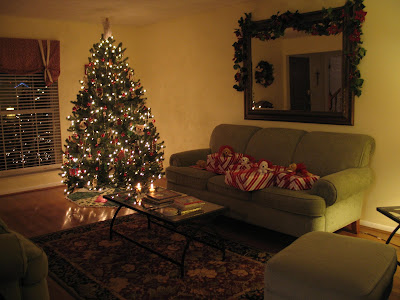 I love the way our big mirror reflects the lights making it look like we have two trees! 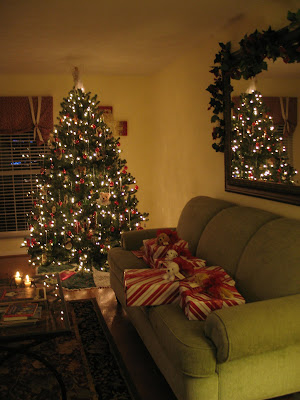 I love my tree and all of the decorations. I don't have one of those wonderful, coordinated designer trees, because I have too many special ornaments which are all different. I use the red balls and the glass icicles to tie it all together. I think it works. 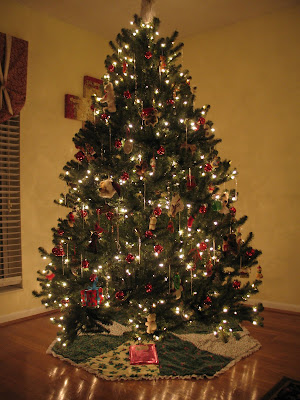 Here is a sweet pair of twiggy looking reindeer votive holders which my Mom gave to my sons. I love them! 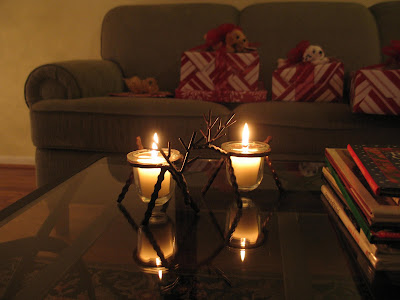 And I love to wrap presents! (My husband thinks I'm crazy on this one.) No "brown paper packages tied up with string" here. I love to decorate the packages with ribbon and floral picks. This year, on the kids' packages, I decided a puppy would be more appreciated than a poinsettia with the younger crowd. It still looks quite nice, and I finally had an excuse to buy an armful of these cute stuffed puppies I'd seen near the Hobby Lobby check out counter all year! 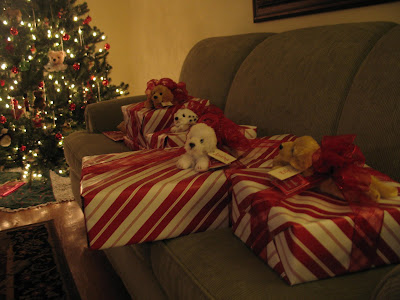 I am finished decorating, but I still have more wrapping to go. I'm looking forward to it!
Posted by Tami Eveslage at 8:10 PM 2 comments:

Christmas is Knocking...Let It In!

Christmas came knocking early this year, too early I thought, and I couldn't close the door fast enough! It was two days before Halloween, and I was sitting in my studio putting the finishing touches on my costume for my brother's party. As I added little plastic spiders to my "Black Widow" veil, I decided some music would be nice and turned on my radio. "Just hear those sleigh bells jinglin' ring ting tinglin'-" came singing out, and I groaned "NOOOO!" I nearly knocked over my Diet Coke trying to quickly shut it off.

"Why are they doing this again?" I thought as I pouted in silence. By "they" I mean my favorite Christian radio station. Last year they played only holiday music from the beginning of November until Christmas Day. Apparently, this year they were beginning in October! A couple of days later my answer came in the form of an email from the radio station (having been a supporter, I'm on their list). They explained that their mission is to reach as many people as possible with the message of God's love, and that when they play the Christmas music they gain many more listeners. Fair enough, I thought grumpily, but I don't have to listen to it.

It is not that I am a Scrooge or Grinch. I love Christmas, but I want it to be special. With stores putting their Christmas things out before the Halloween stuff is even taken down, with companies stuffing my mailbox daily with catalogs and sales ads, beginning nearly as soon as school starts, it seems to lose some of it's warmth.

Christmas came knocking again, the weekend of the Teddy Bear show in Hunt Valley. This time I opened the door a little... While the show was two weeks before Thanksgiving, it had a Christmas theme. Yes, Teddy Bear makers are as keen as other retailers to take advantage of the season where giving often equals spending. But the festive costumes, colorful lighted table dispays, and of course the Teddy Bears themselves had everyone smiling and feeling the warmth, including me. I couldn't help it. I really do love Christmas. On our drive back to Ohio, we even listened to some Christmas songs on the radio. The first one was Josh Groben's rendition of "O Holy Night". Sean had reached for the seek button to change the station, and, having heard my earlier grumblings about Christmas music in November, raised his eyebrows when I stayed his hand. "This one is OK, I guess," I told him. The scene repeated itself with a couple more songs. Mary's Boy Child-- "Oh this is one I never get to hear!" Mary Did You Know?--"But this is a good one."

At the third knocking, I opened the door wide. Shortly after the Teddy Bear show, a friend and fellow Teddy Bear artist posted the following on Facebook, "Merry Christmas! Just practicing." Her post was met with much grumbling, mirroring my attitude of just a few weeks before-too soon! Then Daphne posted "Happy Birthday, Jesus!" and I laughed out loud, not at Daphne-at myself! It was the kind of laugh you let out when you see that the answer to something you've been puzzling over has been staring you right in the face all along! A laugh of realization, a laugh of recognition. I recognized Christmas again for what it really means, a celebration of Jesus' birth, of His life, of His love, and ultimately His sacrifice for us! I recognized it, and let it in with heart and arms open, embracing it warmly, realizing it is never to early to celebrate God's love! Of course, deep down I knew it all along-I can tell by which Christmas songs I let in early, but I guess sometimes I need a reminder.

Enjoy this song which is much more than "OK I guess", it is one of my favorites!
And Merry Christmas!