Sometimes I decide to make a bear, creating it's persona, and sometimes the bear tells me who it is going to be.

I made a parade themed bear I called Franklin for the Teddy Bear's on Parade Show back in July. I was quite pleased with the bear--he was made from one of my favorite big bear designs with a fur color I hadn't used before. In keeping with the parade theme, I made him into a drummer with a band uniform. He was the only bear who didn't find a home during the show. No matter, I thought. I'll just save him for my next show. He waited patiently in my studio.

On a trip to Hobby Lobby, I found an sweet little wooden airplane in the decor section. A few years ago, I had made a bear with a sailor collar and gave him a little sailboat to hold, so I thought I'd make an aviator bear to hold this little airplane. When I got home, I set the plane next to Franklin and immediately decided he needed a change of attire! I bought a child's bomber jacket on ebay, and not only was the color a perfect complement to Franklin's beige and taupe tones, it was a perfect fit. 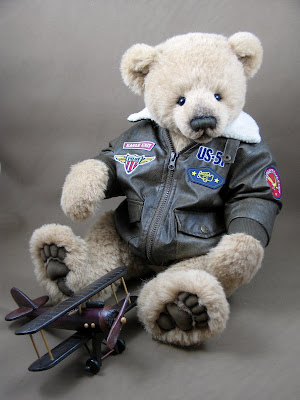 This was the point when "Franklin" spoke up. "My name is not Franklin," he said, "I am Eddie the Aviator!" 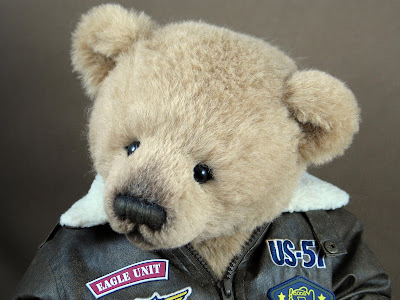 Not only did he let me know who he was, but he also told me very clearly (although not by using actual words-Teddy Bears rarely do) whose bear he is! Every time I looked at him, I just knew he was my Dad's bear. ( My Dad was in the Air Force) So I called up my Dad, and described Eddie to him, and he was very excited. He came over for dinner tonight, and I gave him his bear. I am happy to say, Dad loves Eddie. 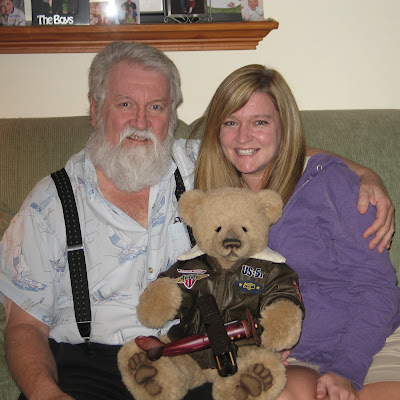 Posted by Tami Eveslage at 5:24 PM

He's so gorgeous, no wonder your dad loves him!

Eddie is absolutely fabulous! Your Dad is a very lucky man--in many, many ways.

He really does look like he belongs to your dad. Might sound strange, but he kind of looks like him. What a kind and thoughtful gift. I gave my mom a bear once. You would have thought I gave her gold.

What a fabulous gift and what a wonderful way to show him what you feel!

Thank you everyone! Dad collects millitary patches and so he came over and we have made over the little jacket withe patches significant to his military service.