You know it's time to clean up your studio when...


Let me explain. I know I am one of the lucky artists who have a dedicated space in my home for my creating, and the best part of having that space is having a place for my stuff (you can read about that in my very first post on this blog, if you'd like). However, just because I have a place for my stuff doesn't mean I always put my stuff away. I love looking at the beautiful organized studios in magazines like "Studios", or "Where Women Create", and sometimes I think I could show my self-designed studio proudly among them. But other times... not so much! When I am working hard, I am a slob. I take out boxes to get something, and just leave them on the floor or a chair. I have a nice handy basket for my oft-used tools, but they don't seem to make it back in to the basket. My work table is always littered with bear parts, mohair scraps, bits of thread, sketches, and lists of things which I must do today as long as I can find the list. 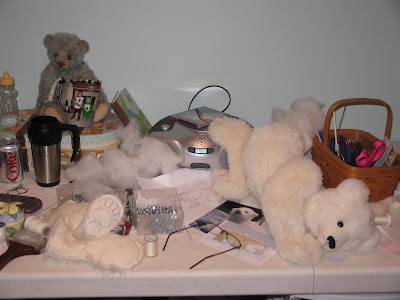 The floor of the studio is usually not much better. It certainly wasn't the evening I "lost" my son!

It happened like this: Brendan had been playing outside with his friends until dark. When I called him in, it was about 9:15. He asked me if he could take the cat to bed. I was surprised he wanted to go to bed so early on a weekend, but he said he was really tired. I told him it was too early to close Missy in for the night and that I would bring her to him when I went to bed. Then I joined my husband in our basement family room for some TV time. Our older son Alex came home from his friend's house around 10:00, and was getting ready to go to bed himself at 11:00pm when he asked Sean and I, "Who is Brendan spending the night with?"


"He's not spending the night with anyone, " I answered.


"Upstairs, in his room. He went to bed early."


"No, he's not. I climbed his ladder and looked." (Brendan has a loft bed)


I decided to go upstairs and check for myself. I climbed the ladder and pulled back the cover. Alex was right! Brendan wasn't there! I looked in Alex's bedroom, both in his bed and on the floor on the other side of the bed. Then I checked our bed, and next the couch on the screen porch. With each empty "bed" my heart beat faster. Where was he? Did he go back outside? I called his name a couple of times. I opened the front door and looked out at our dark empty street. By this time Alex and Sean had come up from the basement and were putting on their shoes to go knock on the neighbors' doors. I ran back downstairs to get my shoes from my studio where I'd left them--and there was Brendan, cocooned in a white blanket, curled up on the floor next to the cat, sound asleep! A staircase with a half wall on both sides divides our finished basement into two, with my studio on one side and the family room on the other. All three of us had run up those stairs without noticing a body lying there in the middle of my studio floor! Why? Because there is always stuff lying about on my studio floor!!!


Note to self: Keep your studio clean, Tami, or you might lose something important! 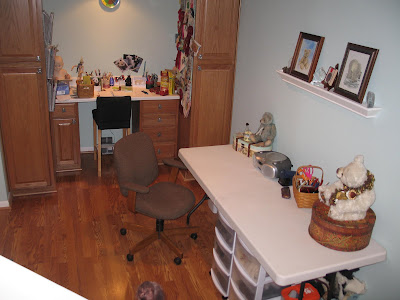 Posted by Tami Eveslage at 9:34 AM

That is HILARIOUS Tami! Poor Brendan: glad you found him before it turned into a national search: imagine the headlines....

ROFL, that brings to mind The Importance Of Being Ernest - 'To lose one parent is unfortunate, to lose two is careless', so you see, having only lost one of them, that would just be unfortunate ;o)

Oh Tami!!
I can SO relate!! I see those neat studios too and I am SO jealous...thinking I can clean mine too and I do...except within a week it's back to chaotic.

I chalk it up to being an artist. My grandfather was a chemical engineer... his lab was always a mess yet he knew exactly where his things were (like me). He was brilliant, it worked for him so I don't beat myself up for it :)

I do "Spring Clean" every now and then but it's ok that I can't keep up on a more regular basis.
And I too have a "to do list" hahaha on my desk :) Funny how all artists are so similar!! (I sculpt dolls btw).

Love reading your blog and seeing your teddies... it's the one thing I collect! lol

Chloe, I think we were on our way to a national search! Sean and Alex had actually knocked on one neighbor's door and Alex was suggesting we call the police! It is really funny now, but I think we were all scared for a few minutes!

LOL, Katy, yes it was unfortunate, but fortunately we found him!

Hi, Tina! I know your dolls!!! I saw a tiny BJD baby you made on You Tube! You do wonderful work! I sculpt dolls too when I have a chance--though the bears (and life) have been keeping me busy for quite a while. yes I do think it's par for the course as an artist!